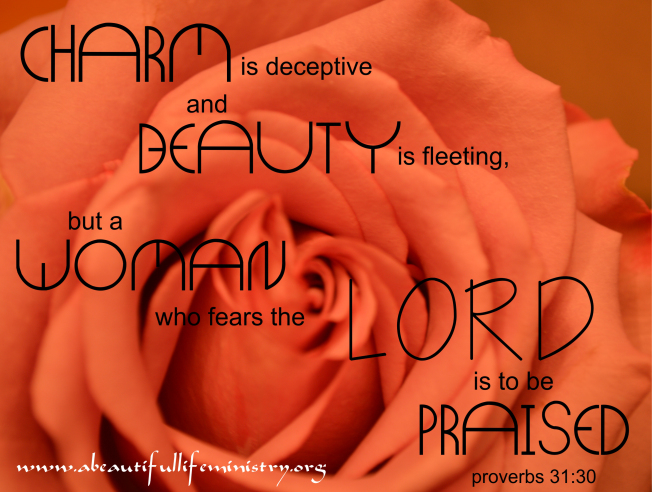 Value what is inside….NOT OUT

Thank God for how he created you and….FEAR HIM

….and you will be praised!

Today we are featuring a new contributor! I’d like to introduce her to you now - Her name is Brenda Gerland and we are thrilled to have her as part of our team of writers:

Brenda is a native Texan, currently living on Lake Travis in Austin, with her husband and golden retriever. Enjoying the empty nest, and the retired life, Brenda has spent the past few years writing and compiling a daily devotional, Dancing in the Drought, due for publication in the late fall of 2013.

She considers herself more of a storyteller than a writer—God has already written the story of our lives and she feels hers is worth sharing because it provides hope to all who feel they aren’t worthy of salvation and redemption. Now that she has been bitten by the story-telling bug, she is continuing to share her life through blogging. Her other passion is visiting with women and mentoring “younger” girls. She is also a small group leader for the women’s Bible study program at her church.

Here is her first post on a beautiful life!

Keep on loving one another as brothers and sisters. Do not forget to show hospitality to strangers, for by so doing some people have shown hospitality to angels without knowing it.— Hebrews 13:1-2

They say that opposites attract. My husband, Austin, and I exemplify that statement. He is the extrovert; I am the introvert. He loves to joke around; I am way too serious. He loves to cook; I would rather clean up his mess. He rarely exercises; I try to do it daily. But there is one “opposite” that does cause some conflict in our marriage.

I am kind of a nerd when it comes to punctuality, trying hard to be early wherever I go, or at least with a few minutes’ cushion. Austin, on the other hand, is usually running late or doesn’t have a minute to spare. Sometimes I get agitated by his habit of trying to accomplish too much in the amount of time he has available and insist there’s no way he can do it all. However, he usually proves me wrong and somehow manages to get home or to where he needs to be, just in the nick of time. The stress involved with that “nick of time” business is what irritates me.

One Saturday, he had a list of errands. We also had a wedding to attend that evening, and needed to leave the house no later than 5 p.m. Austin promised to be home before 4:30, allowing for plenty of time to shower and change clothes. Being the punctual nerd that I am, I called at 4 to check on him. When I discovered he was at least 45 minutes from home, I wasn’t happy. Hadn’t I warned him he was trying to do too much that day? Some errands on his list weren’t even necessities, but arriving early to the wedding was, in my opinion. He ignored my warning, insisting he could get it done.

Wouldn’t you know it? He got home, showered and we were out the door straight up 5 p.m. to go to the wedding, but I was still a bit upset—upset that he had actually pulled it off, especially since I had wasted so much time worrying and being negative. On the way to the wedding, Austin shared the events of his day, and I was so ashamed.

He had a very valid reason for being a few minutes late—he stopped to help a woman on the side of the road. It doesn’t rain much in Austin, but this was an unusually rainy Saturday. A woman had slammed on her brakes and skidded into the ditch. A policeman had called a wrecker to pull her out, but Austin got there first with his 4-wheel-drive pick-up. His act of kindness to this woman saved her quite a bit of time and a considerable amount of money! In her case, he arrived just in the nick of time.

After all of that, my husband had to come home to his wife, who wasn’t the most pleasant since he was running just a tad late. I was reminded over and over of a verse in Proverbs about the quarrelsome, nagging wife.

A quarrelsome wife is like a constant dripping on a rainy day. (Vs. 27:15)

Oh, I was that wife!

I was proud to know my husband had gone out of his way to lend a helping hand and pleased we made it to the wedding in plenty of time. Most importantly, God taught me a humbling lesson. The time my husband gave to a stranger with a car in the ditch was certainly more important than arriving home a few minutes early or even being a few minutes late to a wedding.

God’s timing is perfect and I need to put more trust in His clock than mine.

The Holy Spirit put another verse from Proverbs on my heart that I have committed to memory, for those times when that urge to nag Austin about his time schedule sneaks up. Pleasant words are a honeycomb, sweet to the soul and healing to the bone. (Vs. 16:24) Hum. Perhaps I need to remind myself of that Scripture daily and apply it to all situations.