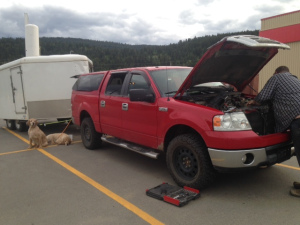 Did you ever have that “feeling” that forewarns you that something is about to happen?  That sense that you have to go forward but you know there will be a toll. I had it but I had to go anyways,  it is something good or bad….or both?

I have not been able to cry for a few months, I want too, many times, but it just will not spill out or come up and over or however, you want to name it. I know for me that when that happens I am usually on “survival” mode. I have been too busy, too involved, too stressed or too something and my body shifts into a mode that enables me to keep on going, but not feel a whole heck of a lot. It is not a healthy place for me to stay in, but it is “safe” for a short while.

Our journey this past weekend meant driving 23 hours or 2300 kilometres from Friday morning to Sunday night, loading up a household, moving my son and his wife from city to city, then unloading it at this end.  Health issues have prevented him from being able to lift anything – they needed help, and so we went. We were bringing some muscle and the trailer to load up their belongings for the move.

When we first went to pick up the 16’ trailer we were quickly halted when only a 12’ trailer was left. There was no way it would hold their belongings. We went home deflated and wondering what to do since there were no rental places open. My husband called his boss and he graciously let us use his personal trailer – an 18’ one. Miracle number one.

We got to Hinton and realised our truck was acting up when we would idle down the truck would shake, and sputter, and this just the first leg of the journey. My husband bought a code reader and we plugged it into the motor – 5 warning codes popped up.  Turns out it was the Cam Shifter Positioning Sensor. We bought one and installed it in the parking lot, the codes went away and the truck ran perfectly. Another miracle….we thought.

We continued on…. by the time we hit Kamloops the truck was definitely not a happy unit. The engine was missing and still sputtering and shaking. We pulled into Canadian Tire and plugged the code reader back in. The same codes – but only 2 of them popped up. The service department had closed 15 minutes prior to our arrival. We called a few people for ideas and the consensus was to test the alternator. We did and it proved to be not functioning properly. We bought a new alternator (not a cheap item) and attempted to install it in the Canadian Tire parking lot. Three hours we were there, the dogs and I took turns sitting on the ground in the parking lot, or helping Brian work on the truck or doing parts run inside the store.

Only 1 person stopped by to talk to us in the first 2 ½ hours. She was from the motor home parked behind us. They live in Penticton and had literally just bought the motor home that morning. It had started fine at the people’s house but after they drove it away, the thing would not start again. They had to sit in the parking lot all night until the service department opened back up. She was due at a dog show in Kelowna so she was heading out in a rental car, but her husband would stay with the motor home. We wished each other the best and I assured her that if we had to stay the night – we’d head over to her hubby for visiting.

We managed to lose a screw for the guard over the alternator so I ran back inside the store to try to find one in the parts department. The man there reading his magazine barely looked up at me and just said, “nope-hardware”. I had to ask him where that was – aisle 27 and then he resumed reading.  I at this point was covered with dust and dirt, I had climbed into the motor, under the motor looking for the screw. At some point, I prayed that God would send us someone to help us.

I found the aisle and attempted to find what I needed, I finally found a young fellow, who I thought probably would be no help, but he turned out to be the best helper ever. He went out of his way to help me but in the end, it was a machine screw and they did not sell those, except in the parts department. I told him that the other guy said “nope”. This guy said they used to so on our way by we would look where they used to be. They did not sell them, but he found something we could bandaid it together with until we could find the right one.

The new alternator was almost in place when I got back, my husband was trying to get it in, bolt it down and get the belt back on. A native man strolled over complete with cowboy hat and asked us if we needed help. Brian was having a horrible time getting a couple bolts in – this fellow said we needed an extension bar to make the job easier.  Brian was attempting to move a wire out of the way and touched the new alternator with a metal bar. The arc of electricity that shot out of the new alternator was huge. All 3 of us stood there silent for a minute or so, then the new fellow said, “I think you just wrecked your new alternator. When they get shorted like that they are usually done.”  He went on to say he had never seen one work after quite an arc like that. He felt we should reattach everything and then test the alternator to see if indeed it was wrecked or not. I know both Brian and I felt like crying at this point. He said that he needed a new extension bar anyways so he would go buy one and let us use it.

After our fellow went into the store, I came up beside Brian and said: “Let’s lay hands on this alternator and ask God to make it work”.  We prayed for a miracle.  I said to my husband at this point – “We need a Steve,” Brian nodded.  Brian has 2 amazing friends named Steve and they are both amazing and logical at working out problems and figuring out how to make things work and had helped us out in so many situations, we were feeling the void at that moment.

The fellow came back with the extension bar and in seconds we got the bolts and belt back on – it made the job so much easier. We went to give him the bar back and he said “I don’t need it – you do. I already have one at home.”

I replied, “ But you said you needed one.”

He told us, “I only told you that, I knew you needed it, so I bought it for you.”

We offered to pay him for the $50 item and he flatly refused. We started the truck and then tested the alternator – it worked. Our new friend stared at the motor and said he could not believe the alternator was working, it did not make sense.  Brian said – “It is a miracle.”

I came over to our new friend and said, “What is your name?”

He stuck out his hand and said, “My name is Steve.”

At that point, I started to cry.

I wish I could say the trip was amazing after that but it was not, from having too much stuff to load into the trailer, to having to rent the 2nd trailer, to having the hottest day to load up the Okanagan has seen this year,  to running out of gas 10 minutes out of Valemont, and the truck has intermittent acting up times still.

But when I would get discouraged I would think of our new friend “Steve” and smile – I believe he was a direct answer to my 2 prayers: Send someone to help; We need a Steve. God was listening. He does not always make clear sailing, in fact, often life is really hard and tough – but He was letting me know He was there and He was with us.

The running out of gas – God encouraged a lady at 8:00 am Sunday morning that she needed smokes and she found us broken down at the bottom of her hill. She whipped her car around and came back inside 5 minutes with a full jerry can of gas that she just happened to have on hand. God can and does use anyone – you just never know when you will need the “good Samaritans” or be the “good Samaritans” for someone else – you just might be the person God uses to encourage others on their journey.  We are so very grateful for ours!

3 responses to “Our Good Samaritans…”