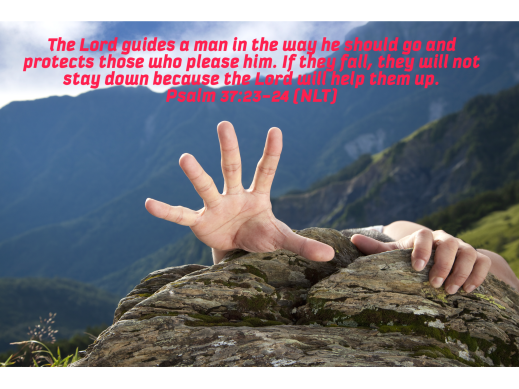 My granddaughter loves nursery rhymes. “The Itsy Bitsy Spider” and “Twinkle, Twinkle Little Star” are her favorites. While I’ve never heard her say a word about “Humpty Dumpty,” it randomly popped into my head one morning after reading an online devotion.

The devotion that led to thoughts of Humpty was about King David. He had waited patiently for the Lord to place him on the throne, even though he could have taken matters into his own hands to expedite the process by killing his enemy, King Saul. Instead, he waited and was rewarded for his obedience.

But then came King David’s fall from grace. It was spring; the time kings usually went to war, yet David sent out Joab and the Israelite army to defeat the Ammonites. While David stayed home! (2 Samuel 11:1)

Like Humpty Dumpty, King David was up on a wall—or rooftop—when he saw Bathsheba. Oh, that act of disobedience to his duty as king, that decision to stay home, led to his great fall.

Humpty Dumpty and King David both had a great fall, but that’s as far as the similarity goes. Humpty was a fictitious character in a nursery rhyme. King David was a human being from the God breathed Scriptures. And like you and me, a sinner. Broken. Prone to fall.

Poor Humpty remained broken—all the king’s horses and all the king’s men couldn’t put him back together again. Thankfully, King David knew the King of kings. Even though he didn’t seek God’s guidance, was disobedient, and endured much heartache after his fall, God helped him back up.

Restored and redeemed because of his heartfelt, godly repentance.

After reading about King David’s fall, and thinking about ole Humpty Dumpty, I had a vision.

Sitting on a wall.

Attempting to work through trials and heartache in my own strength.

In my sinful flesh.

The previous month had been a tough one. Mom had gone home to Jesus, and the emotional impact of her death was deeper than I expected. With my heart still tender, I was over-reacting to most situations. More specifically those involving my husband.

The sale of his business had not gone as planned, which meant retirement was no longer in the immediate future for him—and poor little me would continue spending my weekdays alone while he commuted.

Alone on my wall and focused on poor little me, instead of fixing my eyes on the Lord, could lead to destructive words spewing from my mouth. Especially since I blamed my husband for the failure of our retirement plan.

Or would I be supportive, respectful and encouraging to my spouse?

“However, each of you must love his wife as he loves himself, and the wife must respect her husband.”     Ephesians 5:33

There were two choices:

1. Give in to my sinful nature. Disrespect my husband. Fall from grace.

2. Wait for the Lord’s guidance. Trust in His plans. Obey His word. Experience peace and joy.

I am not a fictitious character in a nursery rhyme. I am like King David. A broken, sinful human. Prone to fall.

Thankfully, like King David, I also knew the King of kings. Even though I didn’t seek His guidance, was disobedient, and endured (and caused) much heartache after my fall, God helped me back up. He scooped up all the broken pieces.

Put me back together. Again!

Restored and redeemed because of heartfelt, godly repentance.

Even though mom is no longer around, I do have her Bible on my desk. After reading that devotion about King David that included verses from his Psalm 37, I timidly opened  it for the first time since her death to savor  the God breathed words.

What a special gift from God! Mom had already been there before me. Her left-handed check mark and the word “wisdom” written beside the number 37. Not only was my Father guiding me back into His presence, but mom’s love was also oozing from the page.

The King of kings anointed King David with godly words of wisdom that I pray will remain in my heart. For the next time my flesh tries to take control.

The mouth of the righteous man utters wisdom,

And his tongue speaks what is just.

The law of his God is in his heart;

Just in case you are also a human, prone to slip and fall, you might want to read Psalm 37 in its entirety…

2 responses to “Thoughts of Humpty Dumpty”